It's been quite a week in the West End. On Tuesday, my best-mate James, who works for Cameron Mackintosh the theatre mogul, phoned to say he had a spare ticket for the first night of Equus starring Daniel Radcliffe, and the majestic Richard Griffiths who, it only occurred to me much later, had played his Uncle Vernon in the first couple of films.

Fearing Peter Shaffer's dusty old tract might have been re-worked for commercial consumption as 'Harry Potter and the Blinding of Nags' I hesitated just long enough to speculate that this was the hottest ticket in the West End, and ran to the dry cleaners for my suit trousers.

It was electric. Radcliffe is astonishing in that as a film actor he has the stage technique to speak clearly and unmiked in a 1500-seat three-tier West End theatre, and either he has natural stage talent or took Thea Shorrock's direction intravenously because he's wholly convincing as Alan Strang and in the masturbatory climax to the first act, or in the ballet in which he blinds the horses he simply owned the stage.

A lot of reviewers took a swipe at the producers by asking why a paean to Laing's psychiatric theorising is really deserving of a revival, but as a vehicle to exorcise the ghost of Harry Potter from the corpus delicti of Daniel Radcliffe, I can't think of a better excuse for dragging it down from the shelf for 16 weeks. And I bet it goes to Broadway too.

R D Laing. He's out of favour now, but he did a lot to demystify mental illness and drag it in public perception out of the strait jacket and electric shock era.

Laing was an off-road explorer in a time when Freud was the only cartographer and Peter Shaffer was giving his pathfinder views a sympathetic airing about the same time Tennessee Williams was still in grand guignol mode railing against giving his heroines lobotomies.

I do think all Laing's stuff about the insane having mystical insights into the nature of life that the wholly rational are missing is a bit over-selective. I think all sorts of people have incisive insights into the futility of mundane diurnal existence. It's just a coincidence that we're actually mad too. 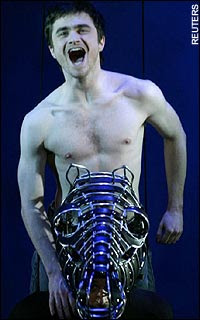 You can't leave this arena without a comment on the physical actor. He's lean and highly toned, in a way simply not visible under the Hogwarts robes and whilst the nudity is entirely natural and within the context of the play, you are entitled to a Mrs Henderson moment in which you ponder - who knew Harry Potter was Jewish ??

I think I was more shocked to see him smoking, than with his cock out.

Actually, and I had to look this up, Daniel Jacob Radcliffe is a child of mixed religious background, but clearly his mother had the final say when it came to the snip.

The bars were heaving during the intervals, and not entirely with celebrity, although I did spot Bob Geldof but up where we were sitting the best on offer was Cilla Black, who I think was smiling - surgery seems to have triangulated her features, and Gail from Coronation Street who is as attractive and elegant as her character is frumpy and naff.

There was a lot of free champagne and I have to confess that Fiona Phillips from GMTV, a woman I have often derided as a total moron, kindly picked me up when I fell over someone's umbrella. It won't make me watch her crap show, but she was rather nice.
Posted by JohnnyFox at 20:13