It was mental aberration day. Having seen Entertaining Mr Sloane in the afternoon, I was idling away some time before a second show, in the Costa Coffee outlet in Waterstone's: dodging the rain, reading the magazines and sampling chapters of a couple of books I would later order for much less on Amazon, when at about 6.30pm I got a text from an unknown number.

'It's Jane. I've been locked out of my flat and will join you as soon as possible.'

I thought it was a wrong number but something made me text back to ask which Jane and where she thought she was meeting me, thinking it might make for a teasing story. Turns out it WAS for me and, despite being instrumental in the organising of it, I had completely forgotten my class reunion and pizza evening with chums from The School of Life.

I fled to Bloomsbury, calling anyone I could think of to see if they'd like my now-unwanted ticket for Carousel - and I even stopped by the theatre to try to palm it off on an unsuspecting punter, but they weren't having it. So I questioned the ushers about interval times, took off for the School of Life reunion and by bolting my gnocchi made it back in a swift cab to the Savoy one minute before curtain ... of the second act.

I have to say, it's not a bad way to enjoy this show which otherwise runs three hours, and whilst I had bought a ticket I did notice there was no check on the way in, and you could do it without by joining the audience as they returned from the interval. Starts at 9.15.

The second half also contains the darker and more imaginary elements of the plot, including the death and ascent to heaven of the anti-hero Billy Bigelow, and his redemption through the heavenly agency of being able to see how his wife and child fared without him. Billy is played by the sensational Jeremiah James - himself 25% of the theatrical boyband Teatro and an all-American leading man of considerably quality both physically (he's exceptionally tall) and in his lyric tenor voice. 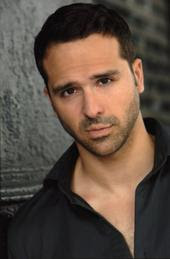 I think it was his singing and that of West End debutante Alexandra Silber that made me realise that what must set Carousel apart from its contemporaries (and Oklahoma!'s a much better show) is the singing. The difficult score demands classic soprano virtuosity and the Silber delivers it, and there is excellent support from a strong ensemble chorus. 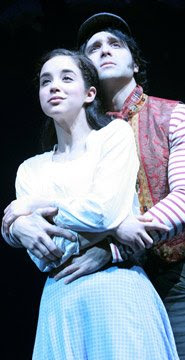 Which then brings us to the contribution of Lesley Garrett, whose talent for self-publicity and positioning is rapidly making her the Dame Hilda Bracket of contemporary musical theatre, here playing the supporting role of Nettie Fowler, heroine Julie Jordan's kindly but mumsy cousin.

Fans of the West End Whingers will be aware of GarrotteWatch, their informal monitoring of the infrequency of The Doncaster Diva's actual appearances, since the slightest indisposition seems to have her excused duties on a scale to rival Martine McCutcheon whose frequent absence from My Fair Lady actually made a star of two of her understudies Kerry Ellis (Elphaba in Wicked) and Alexandra Jay (Sophie in Mamma Mia).

In fact, the absence of principal understudy Ms. Kathryn Akin from tonight's cast suggested to me this was her reward for having covered for La Garrett at the matinee. Bite me if I'm wrong. 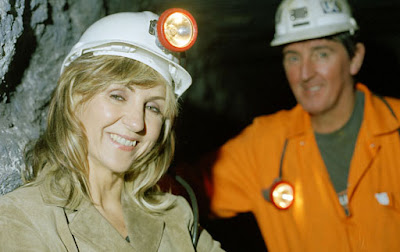 Of course she delivers with deadly amplification the ultimate Anfield Anthem 'You'll Never Walk Alone' but what should be a comforting lullaby to Julie as she cradles her dead husband in her arms is decontextualised and turned into some sort of statuesque Last Night of the Yorkshire Proms as Garrett mangles it with her terrible vowels, and dimpled glances at the audience.

This being a provincial production (up from the Churchill Bromley) the rest of the cast and even Nick Bagnall the director are possibly terrified of her and everyone else stands rigid whilst Garrett gives us her coal-dusted coloratura with the lights dimmed funereally around her.

I'm not sure whether it's worse that she attempts an American accent whilst speaking and abandons it the second she starts to sing, or that she bites all her words with those sharp backwards slanting teeth.

A good production, although unbalanced by Garrett's contribution, it's redeemed by Adam Cooper's excellent choreography - this is the first time I've enjoyed the 'dream sequence' and ballet, particularly the indefatigable contribution of Lindsey Wise as the central character of Julie Jordan's young daughter.

I liked the sets, too, and the computer-generated projections on the front cloth, particularly the moonlit night-time ferry crossing back from the island. William Dudley, I think, deserves the credit.
Posted by JohnnyFox at 22:28