Nuns On The Run

In a week in which seventeen assorted British piss artists on a stag weekend were arraigned in Greece for impersonating nuns - albeit not convincingly enough for the prosecution to produce a single complainant witness at their trial - it seems appropriate to reflect on the position of the Sisterhood in popular entertainment, and why nuns are perceived as funny and cute. 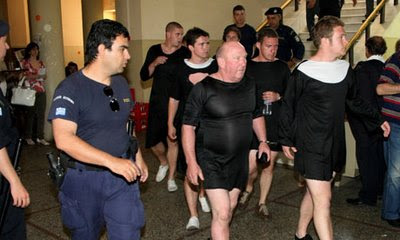 Anyone who's seen or read The Magdalene Sisters - or, indeed, rewound and replayed the segment where Geraldine McEwan thrashes the bejaysus out of Dorothy Duffy with a rubber hose and a glint that should really have disqualified her from ever again playing sweet old ladies like Miss Marple - would consider institutionalised sadism, lesbianism, mental cruelty and downright cant to be core values in convents, but stage musicals resist the repressive and celebrate nuns as cuddly.

Fair enough, but I wouldn't want to bring one home.

Clearly this bunch trained at the Eternal Sunshine Seminary of St. Connie of All The Fishers since they have 'Sound of Music' written through them like rock - there's the dour one, the sour one, the chubby one, the feisty novice and the septuagenarian rapper. Well maybe Rodgers and Hammerstein didn't envision the rapper but in this production it's veteran Julia Sutton (whose age it would be indecent to guess but I bet it starts with an 8 before the show's run is finished) who steals every scene in which she appears.

Sister Act has a slow start as it struggles with the necessary plotline in which lounge singer Deloris van Cartier, girlfriend of a small-time hoodlum, witnesses a gangland murder and is forced to hide out in a convent until the perps can be brought to trial. That this segment is played out to a crude pop musical score which belongs more to X-Factor than Broadway is a frailty in the show that needs to be fixed. Patina Miller, although playing a substandard lounge singer, doesn't make you warm to her as automatically as Whoopi (National Treasure) Goldberg, and only gets the audience onside later in the show. 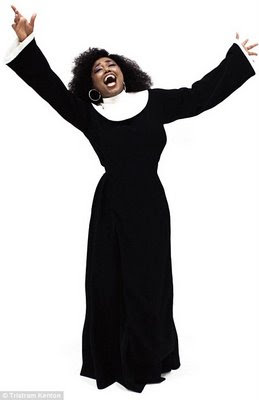 Patina, incidentally, is not the 'Broadway star' the production hype might have you believe. I don't think she's headlined any show indoors in New York although she did appear in 'Hair' in Central Park - and Sister Act itself has never been to Broadway, coming to the Palladium from, er, Pasadena via eight weeks in Atlanta and a two-year rewrite gap. Don't get me wrong, she's good, but she's also slightly misrepresented. Possibly to avoid too much Googling, she's dropped her middle name - search 'Patina Renea Miller' for her early career.

Once Deloris is pitched into the convent, enter Mother Superior Sheila Hancock and her penguin chorale and suddenly we have a musical. In her first speeches, the standard of acting is raised a thousandfold, the comedy is subtler, and she and Ms Miller begin the sparring double act around which the show then revolves. I have to confess I know Sheila, slightly: we shared a monumentally weird holiday in Budapest a couple of years ago and the episode in which we were involuntarily herded in to a 'couples' massage in the Gellert Baths would make a musical comedy number in its own right as we tried to explain our way out, in clutched towels and pidgin Hungarian.

Hancock's only solo - a 'tale as old as time' Beauty-and-the-Beast-retread entitled 'Here Within These Walls' is beautifully if gently delivered: she shares a graceful musical quality with Sian Phillips, belying her 76 years, although the show has been 'adjusted' since Atlanta to reduce the singing load for Mother Superior. Where she excels is in a redefined characterisation which resists comparison with Maggie Smith in the movie, and which is more wryly and directly funny. Although why she didn't attempt an American accent escapes me.

The score is at its best when the nuns are given full throttle: two stand-out numbers (all originals and different from the movie because of copyright issues) are 'Raise Your Voice' in which Deloris instructs the choir in singing and which ascends in power through more key changes than the average Eurovision vehicle, and 'Take Me To Heaven' first sung (badly) by Deloris and her backing singers then turned into a holy roller by the nuns. I also enjoyed the hoodlums' spoof Barry White crooner 'When I Find My Baby' (I'm gonna kill her) and in the Sisters' patter song 'How I Got The Call' lyricist Glenn Slater gives free rein to internal rhyme which looks hugely jolly but is unfortunately macerated by either the diction or the sound desk, couldn't tell which.

Diminutive Julia Sutton threatens to upstage even Hancock as the gravel-voiced hard-drinking Mary Lazarus, and Claire Greenway outweighs Kathy Najimy as the sunny funny nunny Mary Patrick. The minor characters are all fair to good, although I can't quite see why Ian Lavender merits an over-the-title billing for his small contribution as Monsignor Howard.

It's the female ensemble that deserves the kudos, though, for its stamina in switching scene by scene from playing the nuns to the whole panoply of other characters who populate the story, from biker gangs to disco queens. It's a bit like the hardworking crew of Priscilla Queen of the Desert, but with better songs and - you won't believe this - more glittery costumes.

The set (by ex-Czech Klara Zieglerova) works very hard too: double revolve, lots of rising and falling elements, and it makes the scene transitions mercifully slick ... ingeniously so in the 'chase' when the hoodlums get in to the convent to find Deloris, there's a series of doors and arches moving on the revolve whilst the entire cast breaks in to a run through them which must have taken designer and choreographer ages to work out, but v. effective.

Jesus's nailed crossed feet appear from above periodically which is as camp as the giant in Into the Woods ... but even the luminous stained glass windows pale into insignificance against the nun's costumes which are so progressively flashy - by the finale they're so reflective you almost can't look - that designer Lez Brotherston must have finished them in a welder's mask.

The West End is well-supplied with big musicals, tickets are £60something, and with 20,000 a week to sell the Palladium's hard to fill. But for naturally uplifting musical comedy which is reliant on talent rather than the weight of costumes and effects in Priscilla - currently playing to every gay man and his mother in the Western World - I'd calculate Sister Act is a hit.

Especially if you can get discounted tickets.
Posted by JohnnyFox at 15:14