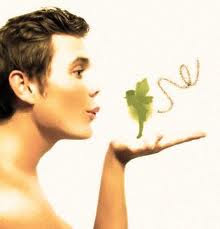 Whilst The Mikado and Pirates of Penzance have had a number of recent and successful modern treatments, wresting the rest of the Gilbert and Sullivan canon from the dead hand of D’Oyly Carte and its historically reverential staging has proved more difficult, so Sasha Regan and her all-male company at the Union Theatre are to be congratulated on a production of Iolanthe which is quite so inventive and engaging.

If you need to trouble yourself with the plot – well, the ones in underwear are fairies and the ones in dressing gowns are Peers, there’s a half-breed Arcadian shepherd who becomes a member of Parliament, and a ward of court who wants to marry him, and the Lord Chancellor is married to a friend of the Queen of the Fairies who has been banished to live at the bottom of a river … it’s all too silly for words, so relax and enjoy the ride.

And a ride it is – joyous, uplifting, funny, sweet, occasionally sentimental but mostly comic with moment after moment of sheer delight in both the musicality of the performers who strive for high accuracy in their falsetto and coloratura, but mostly for a genius theatrical device which allows the young cast to drive along the story and the musical numbers without bothering to age up.

It’s smart and sharp and whilst it doesn’t emphasise the satire on politicians which Iolanthe often invites, it brings in references from Harry Potter, and Peter Pan and Narnia which make the story even more accessible, and the ensemble numbers enormously enjoyable, particularly with Mark Smith’s complex and fluid choreography.

There are some remarkable voices: Gianni Onori as Strephon the romantic lead has a Scots accent which is sometimes impenetrable in the dialogue, but his singing is elegant and tender and Matthew James Willis, an Australian tenor making his London debut is outstanding as Earl Tolloller, with impeccable diction and a richly resonant tone almost too powerful for the tiny Union theatre.

Although for me the falsetto works best in the ensemble numbers, there are some highly skilled singers among the ‘girls’ – Alan Richardson as Phyliss reaches high and clear into the soprano range and Kris Manuel, in between stealing scenes as the Geordie fairy queen, exhibits a well supported contralto, especially in the aria ‘Oh Foolish Fay’.

Production designer Stewart Charlesworth’s costumes are a highlight, well matched with the battered attic set and carefully individualized for every character in the chorus. There’s no orchestra and on one piano musical director Chris Mundy emulates everything from fairy bells to trumpeting fanfares.

This is a gorgeous evening.