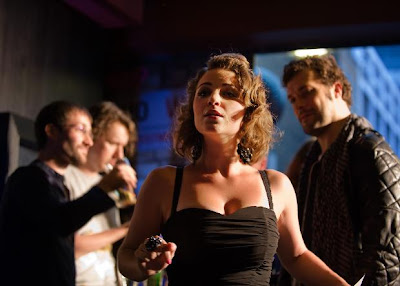 A short sprint across Leicester Square, Jonathan Miller’s new and lavish production of La Boheme is at the Coliseum, with a cast of 40 and a magnificent two-tier revolving set.

When Dr Miller himself went to see OperaUpClose’s production above a ramshackle Irish pub in Kilburn, he pronounced it a ‘revolution’. Now it’s migrated from the Cock Tavern to the modern Soho Theatre to become even more ‘boutique’ by shedding its chorus and having the whole thing played by a cast of eight. In so doing, OperaUpClose have turned it into a nightly phenomenon and it’s become the longest-running opera in the country.

The first act of La Boheme contains all the best tunes and shows Rodolfo and his student mates living in poverty and about to set fire to the landlord’s furniture to keep warm on Christmas Eve. They can, however, afford vodka, wine, beer and Apple laptops and despite the bitter cold are often running out into the street in t-shirts: some of this needs tidying up in Robin Norton-Hale’s clever but uneven production. Mimi, their Ukranian illegal immigrant neighbour stumbles into their group and Rodolfo falls for her.

Mimi’s illicit status needs emphasizing too, otherwise it’s unclear why she doesn’t just go to an NHS hospital when TB overwhelms her – but the construct is brilliant, and proves the resilience of La Boheme to survive equally a massively-budgeted ENO production and this shoestring, chamber, cosy exposition in Soho.

There are three castings for each principal and most of the young singers are in their second or third year after graduation – at this performance Rodolfo was played by a substantial Welsh lad named Gareth Morris, with a dramatic tenor voice of great beauty which sailed through the tricky top C’s of ‘Your Tiny Hand is Frozen’ but whose volume seemed suited more to the arena at Verona than a 100-seat indoor venue.

His uncontrollable power made it more difficult for the others to blend in the ensemble scenes, his diction is sometimes clouded and at odds with the conversational libretto and you felt that just his vocal megawattage might have kept Mimi alive … but I don’t want to underestimate him. In a similarly deconstructed Cosi Fan Tutte I saw about thirty years ago, then-student Bryn Terfel appeared as a mis-spelled understudy in the programme I’ve still kept, and Morris has no lesser potential.

The first act is a touch underlit and overlong but when the audience descends to the bar at the interval, the second act erupts through the street doors like a whirlwind as the action moves to Café Momus and Claire Presland’s tarty chavvy Musetta takes control and wins the audience’s affection.

Back upstairs in the garrett, the mood shifts and towards the end there’s very realistic emotion in Rodolfo’s cradling of the ailing Mimi and genuine disbelief that she might be dying. This intimacy is where the production is at its best, and made several audience members tighten their grip on their partner’s hand.

There’s tenderness too in the piano playing, it’s a major task to play the entire score of La Boheme on one piano, and Mihalis Angelakis did it beautifully.


This review written for The Public Reviews

PaulinLondon and I made a couple of AudioBoos during the evening and I'm quite chuffed that Soho Theatre are using the second one in their own online publicity ...