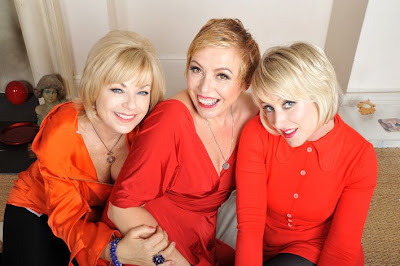 Liza Minnelli may have taught us that Life is a Cabaret old chum but for many mature women it comes with a whiff of vodka and regret.  When brandished at men like a blunt weapon this can cause politicians to question whether feminism is still relevant, but when set to music it can be transformational.

Barb Jungr and Mari Wilson have been around a while: workaholic Jungr on a series of writing projects, her Brel, Elvis and Dylan albums as well as headlining at Café Carlyle in New York.  Wilson is simply a supercool Eighties icon, trademark beehive ditched in favour of a soft blonde bob, and the voice more honeyed and thoughtful.   Now they’re joined by Gwyneth Herbert whose fresh complexion and innocent expression belie an authentic jazz voice honed on late nights in Soho basements.

Kicking off with a slightly desperate ‘Girls, Girls, Girls’ - its lyric ‘who makes it fun to spend your money, who calls you honey’ somewhat wasted on the front row tables-for-two populated by black-clad gentlemen picking at ‘leggero’ pizzas and chugging white Zinfandel, the trio found their mark better with The Stones' ‘Under My Thumb’ in harmonies so tight you could barely sense half a tone between them.

There’s plenty more in the same vein mashing up – and sending up – everything from ‘I Enjoy Being a Girl’ and the B-52's rousing ‘Give Me Back My Man’ to a wickedly funny ‘Never Been To Me’.

The staging and banter between the numbers needs sorting out, and there’s something slightly disturbing about Mari Wilson’s camp delivery and double entendres – possibly under the influence of Jungr’s former comedy collaborator, it seems as if a small part of Julian Clary has rubbed off on her.

Whilst each has her solo, this is clearly Jungr’s show and a powerful, painful and distilled  ‘Woman in Love’ which could not only wipe the floor, walls and windows with Streisand also firmly asserts her position as the most impeccable interpreter of the ‘chanson’ of her own - or any subsequent - generation.
Posted by JohnnyFox at 12:12