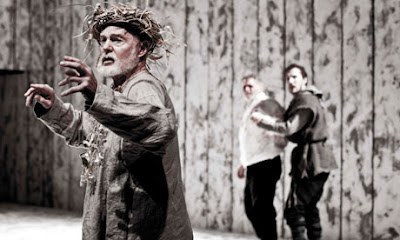 Michael Grandage’s production of Lear has had so many accolades from its run at the Donmar it’s unnecessary to chronicle them here. What is important is to say that if you want to see it you need to scoot to the Richmond Theatre before it disappears off to Cornwall and Brooklyn.

It’s not Shakespeare’s most accessible play, and being neither a fantasy nor a history falls in an almost unique category of being as realistic as possible about an ancient King of Britain without historical fact. Since it features a Duke of Cornwall inheriting much of the monarchy you could say it begs for updating but the conversational modernity and mediaeval-by-way-of-All-Saints costuming seems to suit the text. ‘Illuminated’ is a good adjective for the production because every actor strives for the meaning in the lines, and the setting is a fine bright white-scraped timber box beautifully lit by Neil Austin and underscored with atmospheric sound by Adam Cork.

There’s so much good in it: taut performances, a spanking pace (2h30 plus interval) some sexy effects both mechanical like the storm and acted when the putting out of Gloucester’s eyes is vivid, sadistic and totally thrilling theatre. The subsequent scene where he’s led to the brink of the cliffs is made even more touching by the intensity of his torture.

Does the central performance crown the effort? Yes and no. Because (apart from I, Claudius) Derek Jacobi has largely resisted television and film exposure and clung firmly to the boards this is possibly your last opportunity to see one of England’s finest theatrical knights strut his stuff in the tradition of Gielgud or Olivier. And it is quite strutting. His Lear captures the foolishness is his decision-making, his vanity and constant need for approbation and foregrounds the peevishness making it hard to see him as a great man, rather one in a high position marred by many human frailties. Again, you’ll be able to make modern comparisons from an historic, in many senses of the word, performance.


This review written for Londonist
Posted by JohnnyFox at 16:18