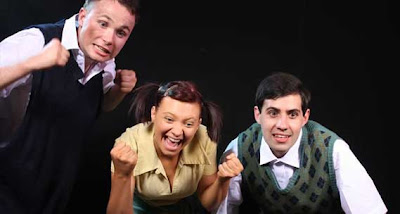 Because the musical’s been a fixture in the West End for over 25 years, initially starring Barbara Dickson but subsequently sheltering any number of pop retirees including Spice Girl Mel C, most of the Nolan Sisters and X-Factor’s Niki Evans, it’s interesting to remember that Blood Brothers started life as a school play written by Willy Russell for Fazakerley Comprehensive in 1981.

Stripped of its music, you might wonder what’s left and how the pathos of a pair of separated twins who later meet as friends across a Liverpudlian class divide will play out unsupported by the anthemic score.

The central character of cleaner Mrs Johnstone and her boss Mrs Lyons, although well-acted, become secondary to the development of their sons whose performances are totally convincing, particularly the gradual transition of ‘posh’ Edward from awkward schoolboy to uncomprehending businessman. It’s a characterisation rich in detail and both he and the ‘street’ brother Mickey strive successfully to keep Russell’s crude polemical view of class difference within the bounds of realism.

The streets of Liverpool are well-realised through simple props like dustbins, ladders and an old door, and the background is provided by a trio of wryly watchful urchins whose attentive expressions and subtle childlike reactions are a model for all ensemble actors.

Cast lists were unavailable but high praise also for the actress playing Linda, the best-friend/girlfriend who inherits the lonely burden of disenfranchised motherhood on a tough estate.