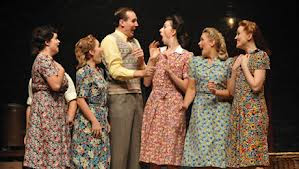 You’ve never heard of Reg Armitage from Wakefield, have you? Much less heard that he was one of Britain’s most prolific composer-lyricists in the years between the two World Wars or that Sheridan Morley described him as the nearest thing Britain had to a home-grown Irving Berlin. Changing his name to Noel Gay didn’t really help his long-term career either, despite writing Me and My Girl, in 1945 the longest running musical in London. A shift in popular musical taste and the early onset of deafness combined to limit his output, although fortunately not before he wrote the music for Radio Times.

Not, please note, ‘the musical’, as this is a compilation of songs from his back catalogue which were first assembled by TV sketch writer Abi Grant for a 1992 West End production starring the comedian Tony Slattery and Kathryn Evans and featuring deliberately corny jokes and a vintage plot.
It is appropriate that Gay’s grandson, Alex Armitage, has revised Radio Times for this production and also that it’s set in 1940, when his chirpy Cockney melodies best chimed with the times. We’re in the Criterion Theatre which being underground has been turned into a recording studio for the duration, and from which the BBC is broadcasting its popular ‘Variety Bandwagon’, closely modelled on Tommy Handley’s ITMA or Arthur Askey’s Band Waggon, for the first time to the USA.
Since this is a show from the Watermill Theatre, Newbury, the formula will be instantly recognizable – there’s no orchestra pit and the cast members all play instruments: it’s becoming increasingly a requirement that acting schools turn out attractive young performers who can act, sing and in the case of the four brilliant young women in this ensemble, play brass or woodwind and tap at the same time.
At the centre of the piece is a deft performance from Gary Wilmot, a showman to his fingertips, with a knowing line in gentle double entendres that had the Richmond audience guffawing throughout, revelling in the nostalgia and blissfully ignoring the clichés in a sentimental love triangle between Wilmot, his long-term girlfriend and an imported ‘Hollywood Movie Star’.
There’s been a gearshift in casting since the wonderful Anna-Jane Casey played Olive, the girlfriend, at the Watermill itself and Sara Crowe takes the role for the tour. Hers is not immediately a name you associate with song and dance, and whilst she may have been having an off night, seemed both tonally and in energy to be slightly below the par for this otherwise excellent cast. Vivien Carter, as the “Radio Girlfriend” who can act, sing, dance and swing a tenor sax, completely outshines her.
The star turn, though, belongs to John Conroy playing the mellifluously-named producer Heathcliffe Bultitude who morphs from strait-laced martinet reminiscent of John Barron as Reggie Perrin’s boss ‘C.J’ and barking “The BBC is clearly no place for creative people” to stand-up comedian and impressionist when he has to take over for an absent guest star. A first-rate performance, Conroy should be on his way to playing Billy Rice in ‘The Entertainer’.
The songs have the bouncy cheerfulness that raised the spirits of people huddled in air-raid shelters, and still have the power to make you smile: a couple are given surprising freshness and invention in Paul Herbert’s arrangements: an a capella ‘Run Rabbit Run’ is particularly outstanding, and you’ll go home humming ‘Who’s Been Polishing The Sun’. Take your grandma, she’ll absolutely love it.

written for www.thepublicreviews.com and published 7 November 2012
Posted by JohnnyFox at 12:52