She IS big. It's the production that got small ...

There's something about Craig Revel Horwood I just don't like. It may be the introduction of confectionery into a surname that insults my diabetic sensibilities. Perhaps other theatre directors could consider the benefits of an injection of chocolate? Would Nicholas Malteser Hytner, or Trevor Minstrel Nunn be any more successful?

It may be the botoxed expressionless sneer he adopts for most of Strictly Come Dancing, or just an aversion to vertical hair, but I had to try hard not to let this prejudice colour my judgement of his production of Sunset Boulevard which has suddenly made the journey from Newbury to the Comedy Theatre in London's glittering West End with most of its cast intact.

What is has manifestly not done is tarted itself up for the trip to town. In fact, like a purposeful Berkshire housewife up for the Sales in sensible shoes, it looks like it's bought an Awayday ticket and is thinking of heading home on the late train.

This is a soundly competent regional production, from the Watermill - one of the most inventive and successful small producing theatres in Britain. Unlike anything you might see in Ipswich or Woking or Watford, it is not reliant on resting cast members of The Bill to attract audiences, nor is it a slave to Bill Kenwright and the Theatre of the Hasbeen.

The structure of the show is the brainchild not of C Revel H, but of the Watermill's resident artistic director John Doyle who pioneered, about ten years ago, the idea that actors in a musical could also play the instruments and dispense with a pit band thanks to the inventive musical arrangements of his creative partner Sarah Travis.

It's a formula which has worked brilliantly on productions from The Gondoliers, cunningly set in a Chicago pizza restaurant, to the outstanding Sweeney Todd which played first at the Trafalgar Studios before transferring to Broadway, giving Patti LuPone her second crack at Mrs Lovett, this time with a euphonium, and winning two Tonys.

At its best, the technique makes musicals more intimate, allowing emotional insight and subtleties of character to emerge from under the cellular blanket of lush orchestrations. I'm not sure if the formula's getting old, or there's some reason for it not to work on this particular oeuvre, but it doesn't.

Perhaps taking the immortal line about the pictures getting small, we should consider that the epic scale of Sunset demands grandiose staging and extravagant production values to match the melodramatic plot and the Churrigueresque characters? Certainly it needs more instruments to emulate that string-rich cinematic sound.

In the 60's, Stephen Sondheim had the idea of making a musical of Sunset Boulevard and collaborated briefly with lyricist Burt Shevelove to put it together, but then he met Billy Wilder at a cocktail party and floated the idea past him. "You can't write a musical about Sunset Boulevard," Wilder responded, "it has to be an opera. After all, it's about a dethroned queen." Sondheim ditched the project immediately.

I love the score. Apart from the fact that it's ironing music - a double CD to see you through the most demanding pile of shirts - and it dawned on me recently that there really only are four distinct tunes in the whole thing, I have loyally seen first Betty Buckley, then Patti, Petula and Glenn Close give their Normas. Shunned Paige, obviously. But this time, it's not working for me. Don't worry, Andrew, it happens to every composer your age at least once ...

Not that you can really fault the performances - Kathryn Evans gives her all in pursuit of the fractured heart and tortured soul of Norma Desmond and in some moments - notably her delusional return to Paramount with 'It's As If We Never Said Goodbye' she nails it absolutely.

It's Lloyd-Webber's fault that "With One Look" comes too early in the show to be effective. When she's in her light, and on her notes, this is thrilling stuff. But in this production she's too often clambering up or down a cranked metallic spiral staircase in heels and a succession of rhinestone peignoirs. Clearly she got the rump of the costume budget because everyone else seems to be in grey and white separates which might have been picked from Debenhams, since they owe little to period or place. 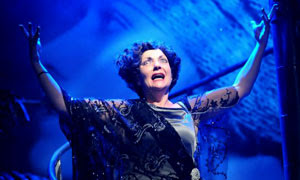 As Joe Gillis, relative newcomer Ben Goddard has to follow great performances like John Barrowman and Hugh Jackman, and whilst marginally less attractive, he has the ordinary guy 'aw shucks' likeability and the floppy haircut, but his range of expressions is perhaps equally floppy.

He does very well in some of the numbers, jolting the production out of its misty unreality with genuine fire in the duet "Too Much in Love to Care" played angrily against flame-haired Laura Pitt-Pulford as Betty Schaefer. In fact so convincing was the tempestuous love-hate argument between the angry young man and the redhead, it threatened to lapse in to Will and Grace: the Musical, highlighting the possibility that Kathryn Evans and Karen Walker could be cousins.

At least he affects an American accent. I have no idea why Evans elected to play Norma quite so cut-glass home counties.

Dave Willetts adds to the grand guignol mood of the drama with a dark characterisation for the servant/husband Max, and effortlessly excellent singing you'd expect from a veteran Jean Valjean and Phantom. The ensemble keep up their instrumental playing relentlessly, and play the entire score from memory, but it does cause some detraction from the diction and the impact of some of the punchier numbers like the rousing 'This Time Next Year' is lost.

I was expecting more from the choreography since that's Revel-Horwood's forte, allegedly. Apart from some nifty traffic-direction with the performers and their instruments moving rapidly without collision, there's little actual dancing - except when Joe and Norma perform the tango in a version so obviously more indebted to Strictly Come Dancing than thirties Hollywood, that you could feel the entire audience clenching to avoid shouting "bring back John Sergeant!"

Kathryn Evans is Mrs Peter Purves (of Blue Peter fame). They met in pantomime in 1978 when she was Dandini and he was Baron Hardup.
Posted by JohnnyFox at 01:22