I'm going to have to stop attending revivals, at least until Alzheimer's kicks in, because my memory is still good enough to make bad comparisons. Anyone marginally less than a hundred and six probably hasn't seen (Sir) Alan Ayckbourn's 1986 play Woman in Mind or, if they have, didn't retain that experience as a pivotal episode in their theatregoing life.

The plot is simple enough: desperate housewife whacks herself on the head with a garden rake, and awakes to an invented world of more charming relatives and a posher house. The staged juxtaposition of her idealised fantasy and disappointing real life eventually overlap in a surreal climax as she goes quietly off her head. 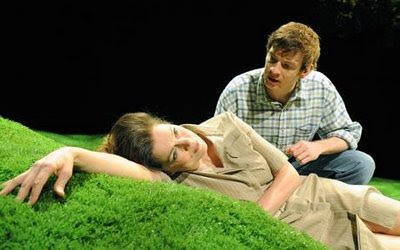 What's clever is that this marked Ayckbourn's transition from a writer of frothy comedies suitable for amateurs and provincial repertory companies into a real playwright with issues to expose and a range of techniques which went beyond staging two plays side by side in different auditoria (House and Garden) or three overlapped stories in consecutive plays (The Norman Conquests) by exploring the fourth dimension, with the shift of time and conception - first in Woman in Mind, and subsequently in Henceforward, Communicating Doors and Comic Potential.

It also used first person narrative, with the female protagonist speaking directly to the audience, a year before Willy Russell wrote Shirley Valentine.

In 1986, it signalled the transition of Julia McKenzie from musical comedy and TV sitcoms to character acting, as despite Ayckbourn's reservations about the casting, she gave what is still considered the performance of her career, and won an Evening Standard best actress award.

Fast Forward (that's probably another Ayckbourn play title) to 2009 and Susan is now played by the entirely excellent Janie Dee, and her compelling likeability places the audience directly on Susan's side which makes it tougher for the 'real' characters - dull Vicar husband, torch-carrying local doctor, and lumpen sister-in-law to gain much ground, or any trust that their version of events is more accurate than Susan's.

This is further hampered in the current production by the casting of perfectly good actors as husband Gerald or doctor Bill - but they're rather ordinary-looking and not known in the West End and it's hard to see what Janie Dee's character would find attractive in either of them. McKenzie was supported by Martin Jarvis and Peter Blythe, and in the replacement cast, Pauline Collins was matched with Michael Jayston and Ralph Bates.

The current under-casting seems to be a fault of many Bill Kenwright shows, but usually only to minor characters, here - despite the credit crunch - in a cast of 8 it seems unnecessary cheese-paring.

The revival is directed by Sir Alan Ayckbourn himself, and it feels too reverential as the production lacks pace and the frenetic climax isn't nearly surreal or bizarre enough.

Times have changed, we need our madness with more special effects.
Posted by JohnnyFox at 11:27