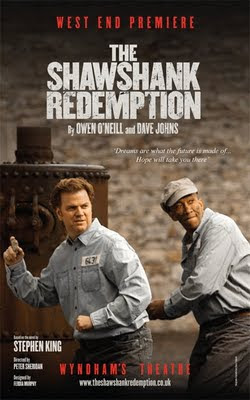 Banged up in a US prison two inmates from opposite sides of the tracks forge an unlikely friendship against a background of corrupt wardens, wisecracking murderers and a hanging. The stage version of 'Shawshank Redemption' is ‘Chicago’ for straight men.

Whilst not actually channelling Renee Zellweger and Catherine Z. Jones, leads Kevin Anderson and ‘The Wire’ star Reg E. Cathey draw parallels as Anderson’s innocent-behind-bars learns quickly who not to trust and how to manipulate the corrupt system, while Cathey’s persistent recidivist tries to distance himself from the morality but eventually succumbs.

Like most current screen-to-stage adaptations (Sister Act, Breakfast at Tiffany’s) legal ownership of the movie rights prevented a direct adaptation from the filmscript and the source material reverts to a less sparkling original novel or treatment.

The dialogue’s too fluent for movie realism but works well enough on stage where the supporting cast turn in sharp characterisations, notably Ryan McCluskey’s engaging performance as the cheerful gambler Heywood. McCluskey is billed as first cover for Anderson’s lead role and it would be interesting to see him play it.

Equally outstanding is the least sympathetic character, the violent sodomite Bogs played with utter conviction by Joe Hanley whose priapic readiness to exact the ultimate rite of passage on new inmates gives new meaning to the phrase ‘hardened criminal’.

Ferdia Murphy’s two-tier set of prison bars is simple to the point of emptiness, and bizarre when placed in the blue white and gold cherub-studded proscenium of Wyndham’s Theatre. Lighting Designer Kevin Treacy could have worked harder to reduce the spill on to the auditorium and focus more harshly on the prison.

An interesting echo on the sound system actively suggests the hard surfaces, but otherwise there's little to indicate place, the passing of time or seasons, or to convince us that this is a real penitentiary.

There’s plenty of shouting and banging, and a lot of booted stomping in the fight scenes but ultimately this Shawshank is hollow. As Roxie says - it’s just a noisy hall where there’s a nightly brawl, and All That Jazz.
Posted by JohnnyFox at 12:38