A Fine Execution at the Tower 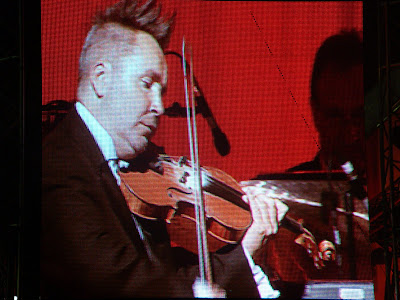 Purism is not the issue here.

The evening started stately enough with Nigel Kennedy, still sporting his Gary-Rhodes-on-steroids butchered pineapple haircut, leading the Philharmonia orchestra through two melodious movements of Bach. So far, so dignified, so what.

What the audience had come for - and got in spades - was a hefty dose of Nige’s blokeish irreverence: chatting to the band, blagging half-finished glasses of champagne from the corporate stiffies in the front row, and generally parading his hallmark punch-drunk staggering routine like a pub comedian on a slow night in his native Brighton.

But when the man picks up a fiddle, and saws in to Duke Ellington’s ‘In a Jam’ it blows away every preconception, and his virtuosity is undoubted.

Perhaps sensing the audience’s preference for the more modern material, he confused the band by changing the running order - as he said ‘you don’t want to work up a sweat with this big band shit and then stop’. Some of the pieces were world premieres, of original 30’s Ellington arrangements re-worked by Kennedy to put more of the emphasis into the strings, and it’s a whole new sound.

It’s a whole new audience, too - many of whom don’t know how to behave in concerts, perhaps the idea that it’s in the open air makes them forget to stop chatting, particularly the chav in row P who answered his phone during the elegant and complex Bach Interventions in which Kennedy sparred electrically with cellist Karen Stephenson, before returning enthusiastically to the Swing era.

And then, just for a moment, with the lush big band sound washing over you, the first stars of the evening appearing over the battlements of the 900-year old White Tower, and the planes lining up for their descent into London City Airport, you begin to appreciate that setting this clumsily brilliant musical anarchist on a vulgar red gash of a stage against the stones of the Tower, in the historical, cultural and commercial heart of the city is what living in London is all about.
Posted by JohnnyFox at 09:58