Sort of enjoyed 'Ghosts'. Hard not to like a play where an orphanage burns down and four out of the five characters get syphilis.

Compact plot: Mrs Alving uses her husband’s legacy to build an orphanage with help of old flame Pastor Manders at whose candlelight supper to open the place, it burns to the ground. Ghostly skeletons springdans out of the family closet when it’s revealed Captain Alving had spread it about a bit, peppering the fjords with genetically-infected illegitimates in the days before penicillin and the son of the house can’t marry the maid he fancies because she’s his sister. He goes blind and dies. 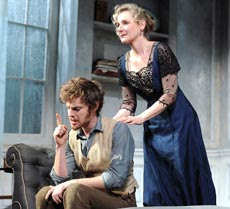 What raises this production so far above the reverential deference typically accorded Ibsen is the design and some excellent performances.

The central dynamic is Lesley Sharp straining at her leash about as far from the cobbles of comfortable Granada dramas as possible and in wonderful contrast to her exhilarating recent performance as bipolar leopard-print Mari in Little Voice. Raw-boned and sharp-elbowed she brings the internal torture of Mrs Alving to the surface in a clear and un-actressy way, abetted by the patently conversational fresh translation by Frank McGuinness.

Pastor Manders is harder to appreciate since Iain Glen, who also directs, chose an accent precisely midway between Mr Hudson in Upstairs, Downstairs and Ian Paisley. As the tortured painter son, Harry Treadaway is beyond remarkable in his overnight progression from pampered prodigal to twitching degradation caught between lover and mother. Someone sign this boy up for ‘Hamlet’, he’s a natural.

Most productions of ‘Ghosts’, like ‘A Doll’s House’ are internalized and underlit. Stephen Brimson Lewis sets this one in a glassy rain-lashed conservatory emphasising the indistinction of the world outside, brilliantly lit by Oliver Fenwick as though by shining light on the family’s problems we can see them, and ourselves, more clearly.

My enjoyment of this performance was greatly enriched by the octogenarian blind lady who sat next to me at the matinee. Her father, who was sixty when she was born, was a Swedish professor of literature who came to England as London correspondent of a Svenska Dagbladet and had been a close chum of Strindberg before being unfortunately killed in the blitz. Her insights into Scandinavian culture, and the rivalries between Strindberg and Ibsen were even more illuminating than the play.
Posted by JohnnyFox at 12:18