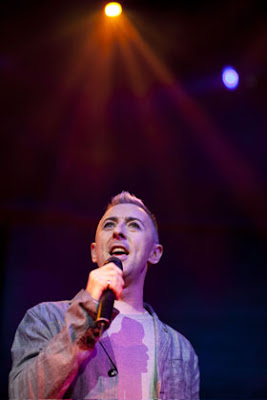 That this is truthfully the middle and both ends of it disguises the fact that it’s a beguiling evening in company of an undeniably charming performer. Although the band seems recruited from music schools and possibly tube stations expressly for this show, they blaze a trail from choky, smoky jazz to bumping grinding Dolly Parton with panache.

Cumming’s musical choices roam the genres from Cole Porter to Cindy Lauper, but also defeat his ability to nail a personal performance style. He occasionally seems tentative in the torch songs but in rocker mode his vocals and his free left hand threaten to punch a hole in the fourth wall.

The confessional anecdotes interspersed with the songs are clearly from the heart but may be familiar to fans of this well-publicised actor, and the name-dropping varies from the deceased (Walter Cronkite, Ann Miller) to the less-than-topically famous, although through a thin story about crashing for the afternoon in the apartment of John Cameron Mitchell he leads in to a blinding medley from Mitchell’s ‘Hedwig and the Angry Inch’.

Let’s go with embrace for now.
Posted by JohnnyFox at 15:59