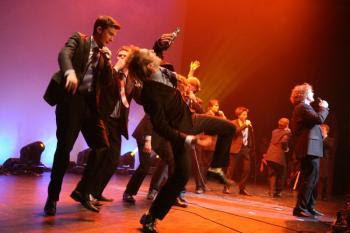 My Edinburgh posse recommended ‘Out of the Blue’, the Oxford undergraduate a cappella singing group. Oh right. Spoilt chinless posh boys frittering away a musical month in jolly old Edinburgh before joining mummy and daddy on the grouse moor? I had to be dragged there.

And on they bounce: hearty chaps in flannel suits, blue shirts and ties all floppy-haired tiggerish adolescence with Bullingdon confidence. I gritted my teeth for the opening piping treble.

“I was working as a waitress in a cocktail bar …” breaking in to a beatbox version of the Human League 80s synthpop classic, complete with every note of the backing track vocalized, these guys have you hooked from the first word.

Their solo voices are amazing, any one of the 12-strong collective makes Philip Oakey sound like a tube station busker, and they throw the lead lines around the group like practised handballers, but when they blend in four or eight part harmony it’s physically thrilling. It looks effortless and casual but the reality must be the product of rigorous choreography and constant rehearsal.

This year their show has been blown up from the constraints of a poky venue at C Central to the cavernous and comfortable George Square Theatre (aka C Plaza) where the wide stage gives freer rein to their energetic shoeless choreography, from bopping along to Amy Winehouse’s ‘Rehab’ to simian freerunning in a completely refreshed treatment of the usually-cliched 'Wimoweh'. Their cheeky humour is subtle and worked especially well in Katy Perry’s ‘I Kissed a Girl’.

In the rarer still numbers, you’re even more aware how exciting the voices are: if you thought The King’s Singers version of Billy Joel’s ‘Lullaby’ was touching, prepare to weep openly at OOTB’s more finely-judged closer-harmonied rendition at four fifths the speed but which manages to keep Joel’s Long Island sound without drowning it in cathedral cheesiness. This has to be one of the single best-arranged and best-performed pieces you can hear in Edinburgh this week.

It's a strong ensemble and perhaps invidious to pick out individual performers but there's a natural actor in lanky Tim Jones, OOTB's president and tenor soloist so committed to the performance that even his floppy curly lock-tossing is in time with the music.

Need a niggle? Their technique is applicable to more musical styles than they showcase in a tight fifty-minute set, and I wanted to see how it worked on a wider range of material. Maybe next time.

written for THE PUBLIC REVIEWS www.thepublicreviews.com
Posted by JohnnyFox at 12:04

Labels: ootb out of the blue oxford a capella group beatbox boyband