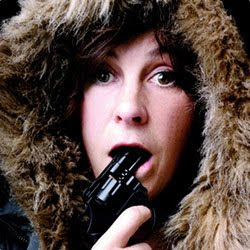 There’s a plethora and a half of one-woman shows at the Edinburgh Fringe where the material spills from the uncoordinated ramblings of an early-disappointed or pre-menopausal harpy at the microphone. ‘Look at my awful life’ they rant ‘and feel better about your own’.

In 'Pension Plan' at the Gilded Balloon Teviot, the oddly spelled but also oddly engaging Leisa Rea cherrypicks some of this theme but the structure’s markedly different from the other vaginal monologues on the fringe. Her set celebrates the undeniable but rarely-accepted truth that not everyone can be a Winner, and it’s OK to lose sometimes, because therein may lie the key to your sanity.

There’s some lovely home-baked interactive TV, including on-screen graphics that hark back to the ‘Vision On’ deaf children’s programme in their unabashed clumsiness, and an ‘outside broadcast’ clearly from outside Rea’s back door by ‘the biscuit-eyed lady’ that binds you to her in sisterly affiliation and mutual love for sandwich creams. She makes origami birds out of her medical diagnoses and rejection letters, and in a combination of courage and confectionery encourages the audience to eat a biscuit she’s baked in the shape of a foetus.

Like a lot of self-written and self-staged work at the Fringe, Rea could benefit from an ‘act doctor’ to sharpen the focus and presentation of the material. But the content’s her own, and all the better for it.


written for THE PUBLIC REVIEWS www.thepublicreviews.com
Posted by JohnnyFox at 22:30