Review of INTO THE WOODS at Edinburgh Fringe
TPR score: 4.0 stars 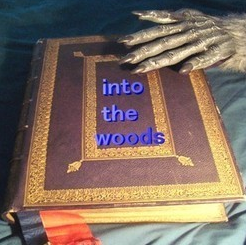 If ever a musical were designed to set traps for amateurs, it’s ‘Into The Woods’. The deceptively accessible ‘pantomime’ themes of Cinderella and Little Red Riding Hood disguise Sondheim’s disjunctive and difficult score full of pitfalls for the musically unwary.

Opera di Nepotist stands out for its bravery: formed in 2009 to produce Sweeney Todd, the company actively embraces people without theatre experience or ability to read music which makes its well-judged and wholly engaging production of Into the Woods all the more triumphant.

As ROH Covent Garden proved in a 2007 Linbury studio version, ‘Woods’ shrinks well to a chamber format if the production values, colourful costumes and well-crafted props are of an exceptionally high standard as they are here. Copyright restrictions mean it couldn’t be trimmed to an Edinburgh-friendly hour, but even at 2 hours 20 with no interval it kept all the audience (except one small-bladdered seven-year-old) gripped throughout.

Some of the ‘one midight gone’ routines could be taken at a faster pace, but the five-piece band drove through the score at a lick, with some exceptionally well-rendered trumpet and string work.

Cast and credits were not available, but the stand-out voices belonged to Cinderella and her Prince, and good characterisations also from the Wolf/Prince/Steward, the Witch and the Baker’s Wife – but the most engaging single performance was Jack (of Beanstalk fame) who seemed best to capture both the spirit and the mockery of the pantomime format as well as the moral dilemmas explored through his character. Topically, when he raids the giant’s home for money, a harp and a fowl that lays golden eggs: is that the action of a boyish hero to support his family and friends, or looting?

This review written for The Public Reviews
Posted by JohnnyFox at 15:03