Review of FRESHER THE MUSICAL
at Edinburgh Fringe 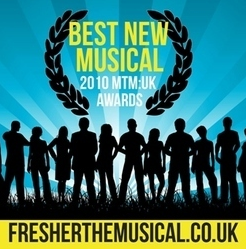 It’s refreshing to see how Fresher’s Week hasn’t changed over the years. The insecurities over how to fit in, find your feet, seem cool and get laid could as easily have been set in the History Man era as today. Five students arrive in their allocated shared flat and through a series of drinking games and party nights discover, and expose, each other’s frailties.

The cast of young professionals and drama students are excellent, but the characters thinly drawn: the lads are variously post-Inbetweeners nerdish, nebbish or c*ntstruck and the girls too baldly contrasted pretentious Sloane and timid virgin. Whilst each actor inhabits the stereotype convincingly and with tremendous vocal ability, only Grace Eccleson‘s performance as Hayley finds emotional warmth and credibility.

As a project, Fresher The Musical has become a vigorously extended franchise with multiple productions and actively promoted performing rights. Like almost all novice musicals, its influences derive exclusively from ‘Rent’ and whilst the sub-Jonathan Larson pop-rock score is enjoyable within the theatre, the musical direction is good and the lyrics are sharp, there isn’t a take-away song or one you could recall even an hour later.

The cast sing enthusiastically “There’s More To Me Than This”, except there isn’t.

The obvious plot is monothematic and if the show’s designed to stretch beyond an Edinburgh hour might improve if the songs were harnessed to a more multi-dimensional script along the lines of Dean Craig’s tight first-year sitcom Off The Hook or the more surreal Campus devised by the Smack The Pony team.

They used to say about The Mousetrap that it didn’t matter if it wasn’t brilliant because there were enough new theatregoers born each day to keep it going for ever. With the Government’s aim for 50% of 18-year olds to get a student loan, maybe the same applies to Fresher.


Review written for The Public Reviews
Posted by JohnnyFox at 15:14