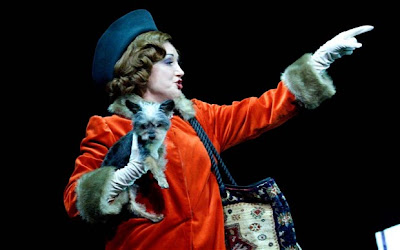 The world is divided between those people who hear the declamatory phrase “I had a dream …” and think first of Martin Luther King, and those who in their heads automatically append “… I dreamed it for you, June” and call to mind Ethel Merman’s career-defining role as the ultimate tyrannical stage mother in the 1959 Jule Style/Stephen Sondheim musical Gypsy. It charts the childhood and early career of stripper Gypsy Rose Lee and the latest revival, well timed for Mother’s Day, just opened at Leicester’s funky Curve theatre.

Broadsheet critics (Spencer, Billington) fell over themselves to discredit the popular suggestion that Gypsy is the King Lear of musical comedy – yet the fact remains Mama Rose is the part you assail at the very peak of your powers because the physical demands and the emotional engagement require tremendous stamina as well as half a stage lifetime of craft experience. Many actresses leave it too late to play credibly the indefatigably pushy three-times-married stage mother of teenage girls, but at 49 Caroline O’Connor has the lungs and the legs to nail it.

Does she? Yes and no. In Paul Kerryson’s curious production the style wavers between modernity and an urge to reiterate the original, and O’Connor seems caught in the same dilemma – whether to channel the fully-leaded Merman she imitated so well in ‘De-Lovely’ or strike out a line for herself and decorate the songs with darker and more original references to motives drawn from Rose’s troubled past which could have led to a disturbingly climactic breakdown in the final number.

Perhaps she’s still working it out, but it feels a shade tentative this early in the run, and at times it seemed as though she was playing someone else playing Rose. With her tiny clenched fists and habit of shaking her head before speaking, you get a glimpse of how Julia McKenzie might have done it given the chance.

One of the great benefits of having an actress in her forties play Rose, is that the relationship with agent Herbie can be more palpably romantic. On Broadway, Tyne Daly made Rose actually sexy and both ‘Small World’ and ‘You’ll Never Get Away From Me’ became more highly charged as a result. I couldn’t warm to David Fleeshman’s sturdy suburban Herbie, he seemed under-charismatic for a man who could distract Rose from her fiery purpose, and there’s no chemistry between them.

The roles of Louise/Gypsy and dancing sidekick Tulsa are both a blessing and a curse: they’re great showcases for talented singers and dancers and yet apart from Tammy Blanchard (Louise in the Bernadette Peters version) currently supporting in How To Succeed In Business , I can’t think of a single actor or actress who graduated from those parts to West End or Broadway fame. Jason Winter has the moves for sure, in David Needham’s energised choreography, but no warmth or depth. Victoria Hamilton-Barritt is so convincingly dowdy as Louise that it’s a genuine surprise when, almost too late, she blossoms into such a fine and self-mocking Gypsy channelling perfectly Natalie Wood’s measured intonation from the film.

The trio of strippers as usual steal the show: the ‘You Gotta Get A Gimmick’ number usually belongs to Mazeppa, here made copious flesh in Lucinda Shaw’s bullishly comic performance, but Geraldine Fitzgerald more than makes her mark as Tessie Tura. Elsewhere in the ensemble it feels a bit understaffed with just 13 actors covering so many parts – Stuart Ramsay gives exceptionally good value – and the local children pressed into service as young June, Louise and their troupe are excellent although it’s a pity more actual boy ‘newsboys’ couldn’t be found.

The understaffing extends to the pit where the orchestrations have been re-worked for a ten-piece band led from the keyboard by Michael Haslam. This is such a lush and epic score, that it’s not best served either by this downsizing or the pace: the show’s pushing three hours.

Transfer? No, but it’s been forty years since the West End saw Gypsy and we should look to the National Theatre, arguably the only outfit that could give this heavyweight of a musical the resources and the staging it demands. If I were Trevor Nunn, I’d also rotate the actresses playing Rose to give “the greys and the gays” in the audience their opportunity to pay twice to see the same show.

(This review written for www.remotegoat.co.uk where it gets 4 Stars - but the production hasn’t yet been loaded into its database)
Posted by JohnnyFox at 14:17