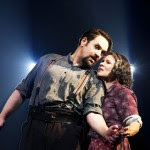 Sweeney Todd is Sondheim's equivalent of Shakespeare's 'Problem Plays' wherein the protagonist struggles with a moral dilemma or social problem, in Todd's case precisely how many throats to slit in revenge for his deportation to Australia. As such, it requires a feat of both acting and singing that prove challenging to the strongest performers, and despite critical acclaim at Chichester, it still seems Michael Ball's stretched.

First of all, and disappointingly for his seat-wetting coterie of housewifely fans, he doesn't seem like Michael Ball.

Uncharacteristically dark and straight-haired, with a dyed goatee, it could occur to you he has sent comedian Phill Jupitus in his place. When I met Ball at Wimbledon towards the end of his Hairspray tour, he admitted he was nervous at the prospect of playing Todd because it was so far out of his normal vocal range, and he's not a trained singer. 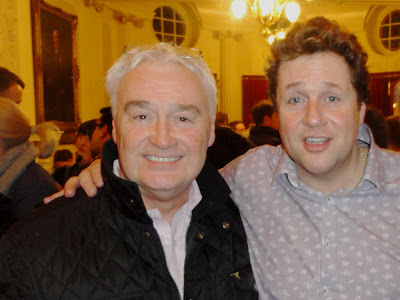 Perhaps rightly he hasn't attempted the continuous stentorian delivery of Bryn Terfel or Denis Quilley in the role, because his voice wouldn't support it, but his brooding and introverted performance leaves a hole in the centre of the show which is now filled by a breathtaking Mrs Lovett from Imelda Staunton.

Staunton's ascent from comedy maids to 'national treasure' is well charted but this is something else: when you consider how many fine actresses have essayed Mrs Lovett, from Angela Lansbury to Patti LuPone you would think no-one could wring any more out of the sock of the part ... but Staunton finds nuances and subtleties in the script and the songs that simply weren't there before. It's a marvel to watch particularly, in the darker second half, the equal quantities of maternal affection and murderous creepiness with which she infuses 'Not While I'm Around', and her frantic harmonium playing and perfect Ball-straddling comic timing of 'By The Sea'.

The support is variable: there seems a casting mistake between John Bowe (Judge Turpin) and Peter Polycarpou (Beadle) because Bowe's by far the stronger actor and Polycarpou an infinitely better experienced musical theatre singer: I'd have had them swap roles. Weak contributions, too, from a softly boyish Luke Brady as sailor Anthony, and a frankly dreadful shrill and colourless Johanna from Lucy May Barker, but a scary and strong Old Woman from Gillian Kirkpatrick.

Underlit and over-directed (Jonathan Kent is determined to make it an opera) the piece is bizarrely costumed with 1930s garb, and Pirelli arrives in a motorised van - yet the atmosphere is still Victorian grinding poverty. No one around me could suggest what the 30s (or 50s, who could tell?) hair and clothes did for the show, apart from to wonder if Imelda had come dressed for 'Vera Drake: The Musical" and to put the price of pies up to 'thruppence'.

"Who knows if it's going to run" sings Todd in the pie song ... it's clearly an expensive package, but at over thirty years old the dust's on the script as well as Mrs Lovett's pie crusts, and without Ball playing to his gallery of admirers, it may have a tough time filling the Adelphi across the summer. The producers have some gimmick casting in mind, though, comedian Jason Manford (who as far as I know can't sing) arrives as Adolfo Pirelli in June whilst Robert Burt does a real job at Glyndebourne.

Was the 'Go Compare' man (Wynne Evans) not available?